If you guessed because there were lots of butterflies, you were correct!

Mom just loves butterflies (she even has a simple tattoo of one on her left shoulder) so anytime she spots any she tends to need to stop and admire it until it flutters away.

Most of the butterflies were of this variety: 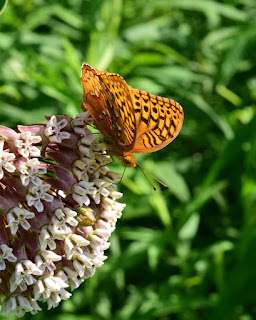 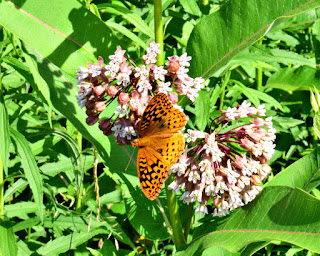 Mom thinks, after some researching, that's it's something called a Great Spangled Fritillary, though she's not 100% sure. There are a few different types of butterfly all called that look exceedingly similar and it's making it hard to believe that she is 100% right.

That wasn't the only type there though! There were also a few of these guys: 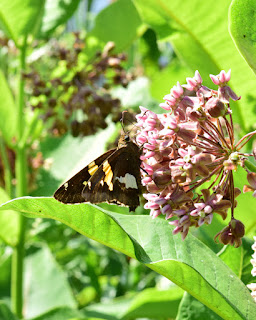 Now he was much easier to identify - it's called Silver-Spotted Skipper!

The last type of butterfly Mom spotted was this little guy: 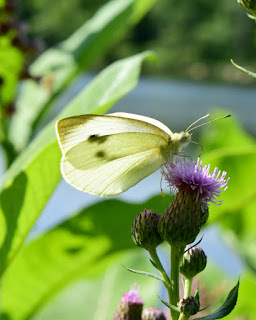 This one is called a Cabbage-White, and was the easiest of the butterflies to identify due to just how common (but still very pretty!) they are to the state and general area.

One top of all the pretty butterflies, there were also lots of other types of bugs enjoying the milkweed plants.

There were LOTS of these guys around: 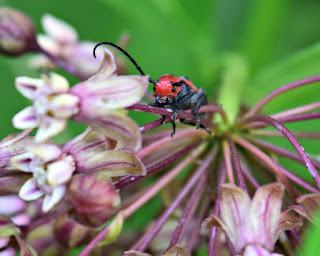 This is an Eastern Milkweed Longhorn Beetle. Mom though they were kinda creepy-cool, and one of the nifty facts she learned after was this:

As in many longhorn beetles, the antennae are situated very near the eye–in the red milkweed beetle, this adaptation has been carried to an extreme: the antennal base actually bisects the eye.  -Source of Info in Link above

Kinda creepy-cool, right? And if you look close at the pictures Mom took, you can see that it actually does. 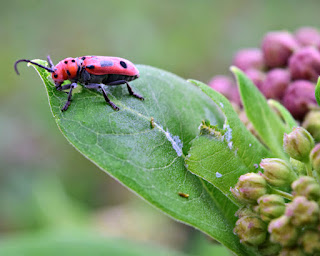 That wasn't the only type of beetle present, there were also these shiny ones: 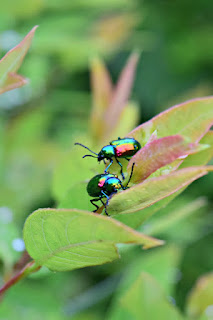 These are another type of milkweed beetle, called a Colbalt Milkweed Beetle. Mom though that they were really pretty, wearing what seemed to be a rainbow on their bodies.

I had to practically drag Mom away from all the butterflies and beetles, because she just did not want to go! I threatened that I would go get Dad, and he would be most unhappy to find her poking around in the tall grass and weeds where evil things like ticks like to lurk and hide.

...and here she had been worried about keeping ME out of areas like that, and leaving ME at home when they do walks and hikes for just that reason!

((Wes' Mom: When I am not photographing Wesley I tend to be taking pictures of any other little thing I can find. I LOVE macro photography, and have been considering starting a smaller blog of my own to talk of it and show some of it. I don't even think about things like ticks or poison ivy (which I suffered through earlier in the year thanks to spotting some pretty little Lily of the Valley) when I have my camera in hand and something interesting in front of me!))
amandas photography bugs lake macro mom photography