5/15/2014 09:00:00 AM
Yup! For today Momma is going to repost a blog from October of last year that detailed the first day of my first vacation. Today we're heading down to this same exact place again for a fun weekend. Unlike the first time, Momma plans on posting since she now has a wonderful working laptop to haul down there with us, yay!

Curious about my first ever vacation?

And we had SO MUCH fun! The place we went was right at the bottom-ish tip of New Jersey, right between Cape May and the boardwalk at Wildwood. My pawrents have been there before a few times, where we stayed is a condo that's owned by my poppa's pawrents.

We were supposed to start our trip down on Thursday, but due to a few things that happened that day couldn't leave until Friday morning. We left at 10 in the morning, and got there at about 2pm. It was a beautiful day...and what a view we had!

We hung around in the room for a little while before we went down to the ground. The ground there was so much different then the ground back home, it was soft and mushy. Mom said it was sand! The first time I put a paw on it I had no idea what to think! So, I did what any puppy would do...I ran around like a manic on it! Mom tried to take a video, but somehow deleted it when she went to look at it herself. It makes her a little sad, because it's a first of mine she'll never see again. I've already crossed my paws and promised her to act incredibly goofy the next time we go back, because I'm sure I'll have forgotten just how weird that sand stuff is at first!

Anyway after I got used to the feeling of this sand stuff under my paws, I saw IT. The biggest most amount of water ever!


It was moving! I tried to go after it, (I AM a poodle and I DO like jumping around in puddles after all!)...but when I did IT CAME AFTER ME, TOO!

I decided after that that maybe attacking the water wasn't such a good idea. Instead I stayed up further on the sand where the water couldn't get past my paws.


After that we walked a little more on the beach, and I acted goofy and played and ran and dug a bit in the sand.


Once we were back inside Mom and my poppa and me loaded back up into the car because they needed to go get people foods for the next few days. There was a Petsmart right next to the people store, so we went in because Mom needed to get me some more foods. While we were there my poppa got this big girlie pig thing for Honey back home. We won't tell Honey this, but I got to play with it first once we got back to the condo! 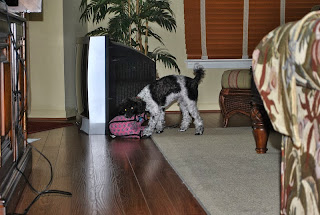 After that we all just stayed in, and went to sleeps early because tomorrow was another day with more fun promised!

....which mom and I will post all about tomorrow! With LOTS more fun pictures! Hope everyone here in blogvilled had as good a weekend as I did!