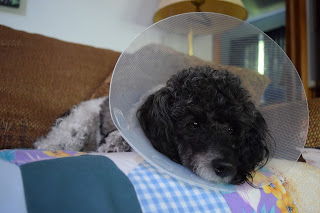 There has been no swelling in my leg, which is really good. Mom is watching me like a hawk, and being very careful about keeping the injured areas, especially the deeper one, clean.

We came back to NJ and Dad's house yesterday. We returned for a few reasons, one of which is that my uncle Steve is currently working from home and will keep an eye on me while Mom works.

I'm doing alright...but I am most definitely not myself. It's hard to be yourself when things hurt, though.

The good news is, is that they won't hurt forever...and I'm sure that in a few days or so I'll be feeling just fine again. 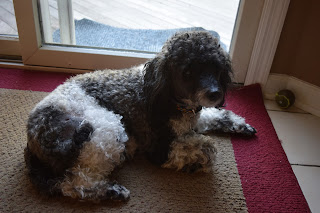 But for now...I'm just going to sit here and not move too much, ok?

((Wes' Mom: I really do hate seeing my little dog the way he is right now. When I came home from work yesterday (early, because all I was doing was worrying myself sick about him) and went down to my room he was on my bed. He was feeling so bad he didn't do more then life his head to look at me before just laying it back down again.  Usually he's a crazy wiggle-butt when I get home and makes these ridiculous little happy sounds. When I went upstairs to get his antibiotic he didn't follow, which he normally does. Gave him the antibiotic and then just sat with him on my bed for awhile, there may have been tears on my end. The next time I went upstairs he DID follow me after a few minutes, which made me very happy.

Packed up our bags, headed to NJ and he seemed to be pretty much himself at this point. Chris got the wiggle-butt that I didn't when Wes saw him...as did Chris' brother Steve and both his parents. Fed Wes and he ate happily. Chris and I went out to get Wesley a few things, and when we got back he happily scarfed up the doggie S'mores flavored cookies we'd found.

Two of them, actually. LOL

This morning was an early one as I had to go to work. Wesley wasn't very inclined to move. We went downstairs, he stayed up in the bed. I came upstairs and carried him down. Took him out, but he wasn't interested in going to the bathroom...he just sat and looked sad at me.

Gave him his anti-inflammatory/pain med before I left for work.

Got back and he was hanging out with Steve in Steve's room. Jumped off and came right too me, but didn't wiggle butt. He opted instead to lay down and get belly rubs. Tried to coax him to walk to me a few feet down the hall...and he did but then just curled up in my lap. Gave him him antibiotic packed into a little ball of the canned food I'm currently feeding him and he took it no problem. Carried him downstairs to take him out, as I was told he hadn't gone to the bathroom at all yet today. Took him out and set him down, tried to get him to walk a bit and 'go potty' but he just sat and stared again.

We were out there for about half and hour to fourty-five minutes and he didn't move anymore then to lay down or drink some of the water I brought out for him.  Tried to offer him one of the S'mores dog cookies he was so happy to snarf down yesterday, but he wanted nothing to do with it.

Offered him a spoonful of his canned food to see if was rejecting food totally or just rejecting the cookie and was glad when he ate that right up, too.

As of right now his deepest wound is looking good...there is no swelling and the fluids that were draining seem to have slowed down/stopped. I got an anti-septic spray yesterday along with the cookies that I've been spraying on a paper towel and then wiping around the area to be sure it's clean and won't infect. The three smaller wounds by the base of his tail I'm just spraying openly with the spray.

He seems to be alright, but I'm sure he's hurting. I can't imagine him not. The dog that left the marks (not a random stranger's dog, but a dog we do know...NOT Honey) is a dog double his size and weight ; a 9 or 10 month old, 40 pound lab/shepard mix.

It's a long story, and there IS a history between the two of them. I'd like to not have him anywhere NEAR this other dog, and have had that feeling for a LONG time...but right now we don't really have a choice in the matter.

But anyway...he seems to be doing ok. Right now what I'm most worried about is the fact that he hasn't gone to the bathroom since about 7pm yesterday. Number one OR number two.

I am happy to report, that as I am writing this Chris arrived and HE got the wiggle-butt greeting that I did not. It wasn't it's usually length of wiggle-butt...but it was there.

My usually Wesley is in there somewhere, just locked up with hurt.